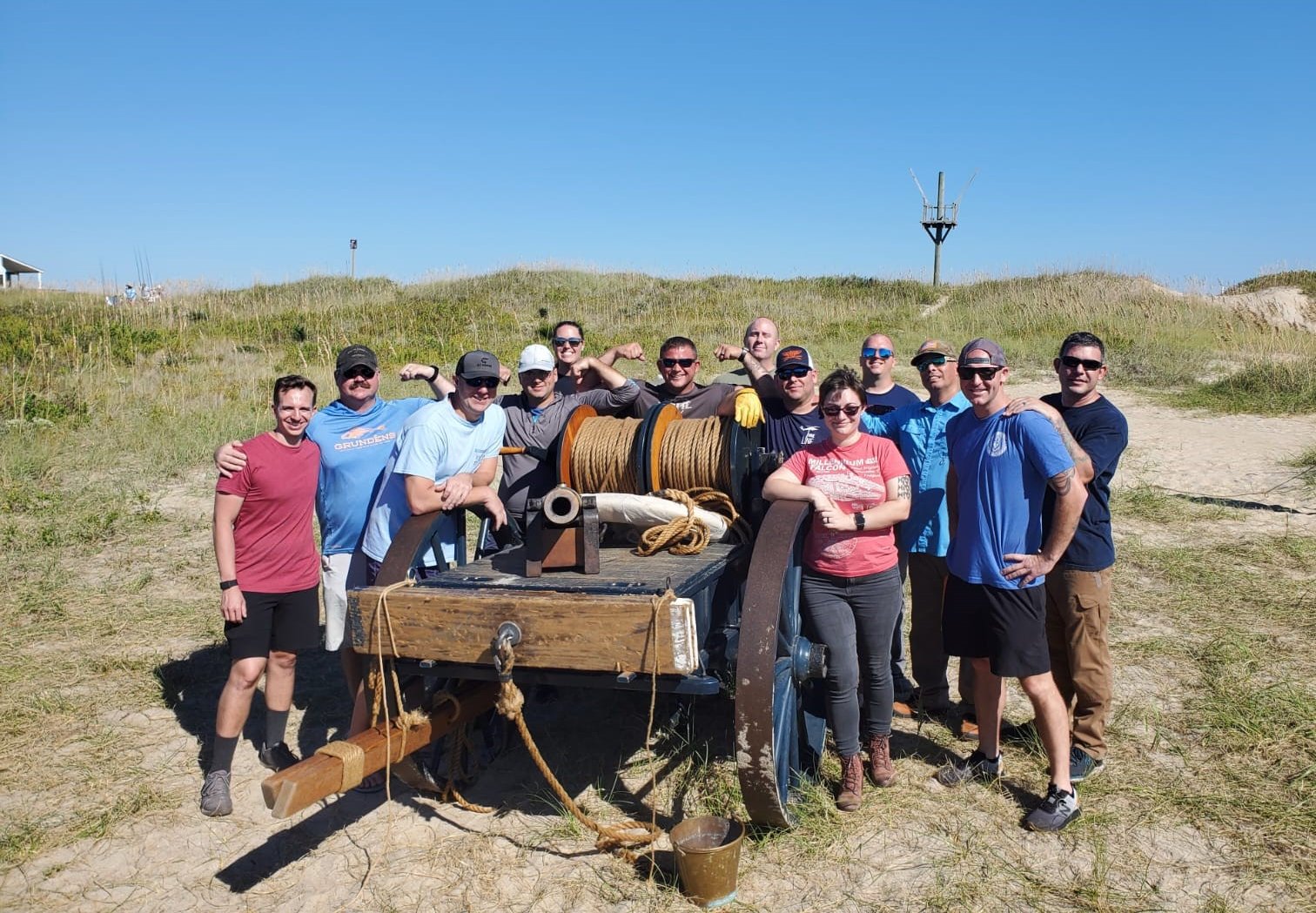 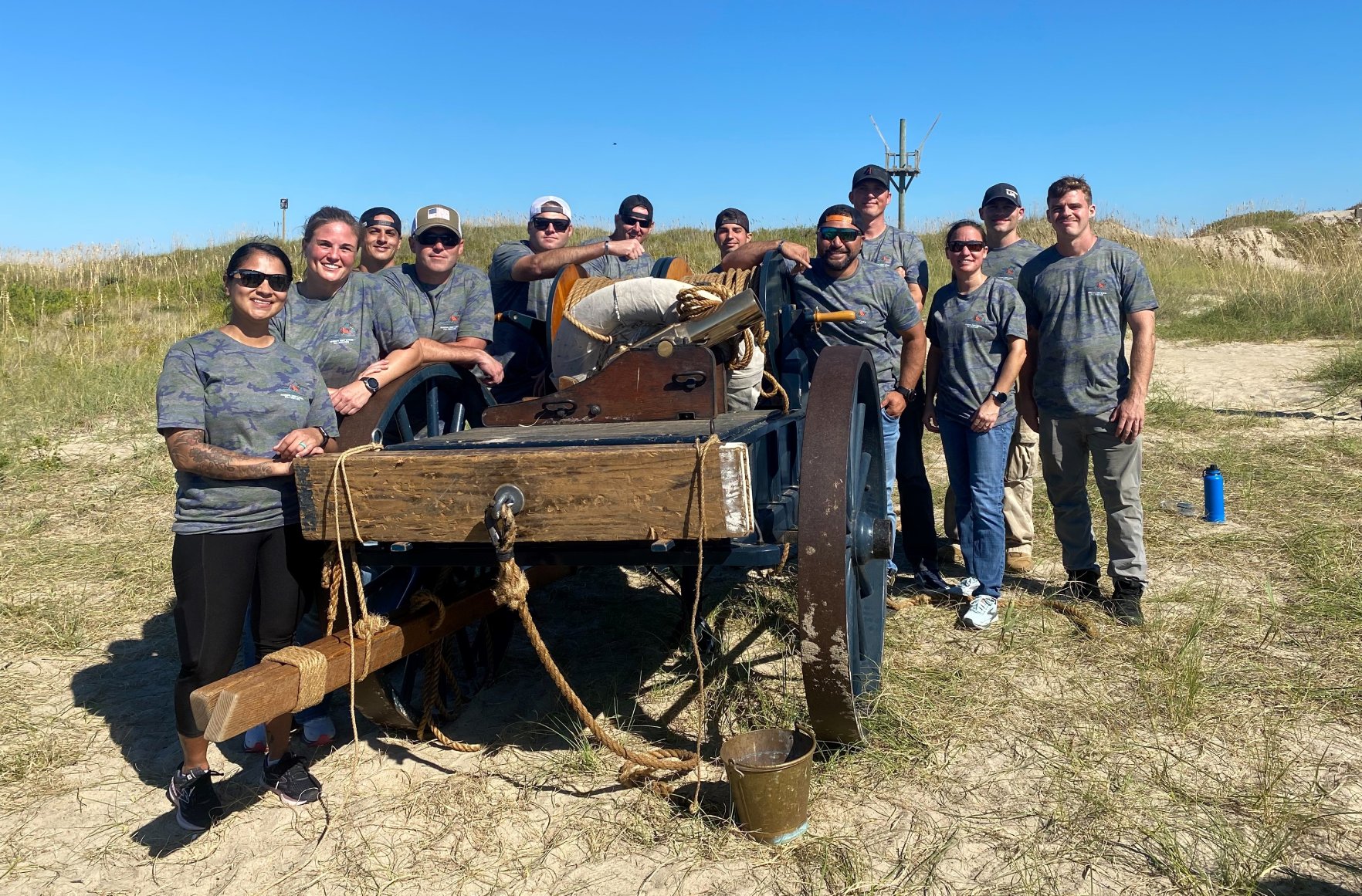 A lifesaving re-enactment drill that is not on a Thursday at 2pm? Yes, kind of.  More like a sand flying, rope towing, gun shooting battle royal of North vs. South that went down October 7th at the Chicamacomico Life Saving Station in Rodanthe.

Being a volunteer surfman showing up for duty Friday morning, I wasn’t sure who I was going to train to do my duties. I wasn’t expecting two rambunctious smart groups of Coast Guard Chief’s excited to learn the lifesaving drill of their forefathers, then to compete against the clock in front of an audience for Drill supremacy.  Six volunteer surfman, including our keeper, walked the two teams through the process that each position in the nine surfman team is responsible for.  I’m sure all were told at some point, their position was the most important because of  . . .  which is probably true since it takes every person on the team to perform without error to save the shipwrecked crew.

As the sun passed noon, the First Flight Chief’s Mess out of Elizabeth City and the Chesapeake Regional Chief’s Mess groups of men and women each had a chance to practice a slow-motion hands-on practice drill including saving one of their own.  I think the young female Chief riding the breeches buoy was more excited to keep riding our pop-up “zipline” than most of our in-season younger audience participants.  During the drill practice there was much discussion about how the Life Saving Stations of days past have shaped parts of the Coast Guard of today.  Civilians, like myself, learned about how may different careers are available in the Coast Guard, and what an integral part of world safety they are currently playing.  In what seemed like normal Coast Guard behavior, we broke for a 20 minute lunch in which everyone inhaled food prepared by the Hatteras Island Christian Fellowship that deserved to be savored not inhaled.

With full bellies and a morning of training behind them, it was time to hit the drill field with stop watch out.  In the viewing area spectators included groups of active-duty personnel, retirees, and families from Elizabeth City, Portsmouth, Norfolk, Chesapeake, Oregon Inlet, Hatteras, and lucky members of the general public.  The teams’ respective Keepers yelled “Action” and teams sprang to their assigned  duties.  Holes were dug, the Lyle gun set in position, hundreds of yards of rope laid out in the ready, followed by the Keepers yell of “ready” causing a blast of fire and smoke as the 16 pound projectile blasted from the cannon-like Lyle gun.  Both teams hit the target, a simulated shipwreck pole, perfectly with the rope attached to the projectile.  Chiefs now running and pulling on lines frantically getting the knots secure, ropes pulled tight and getting zipline type device secured for a brave seven-year-old girl from the audience to be “rescued”.  When her feet touched the ground, the clock came to a halt.  In the end, it was not a North vs. South competition but a historic vs modern challenge, as the real surfman were required to do the drill in FIVE minutes or less, and our modern teams took over twice that time.  As far as a winner, I’m pretty sure everyone that showed up at the Chicamacomico Life Saving Station that day left having been entertained, met a friend, learned something new, and brought some Rodanthe sand home in their boots.