Hard-fought Battle of Rescuing on behalf of the Rescuers

Hard-fought Battle of Rescuing on behalf of the Rescuers 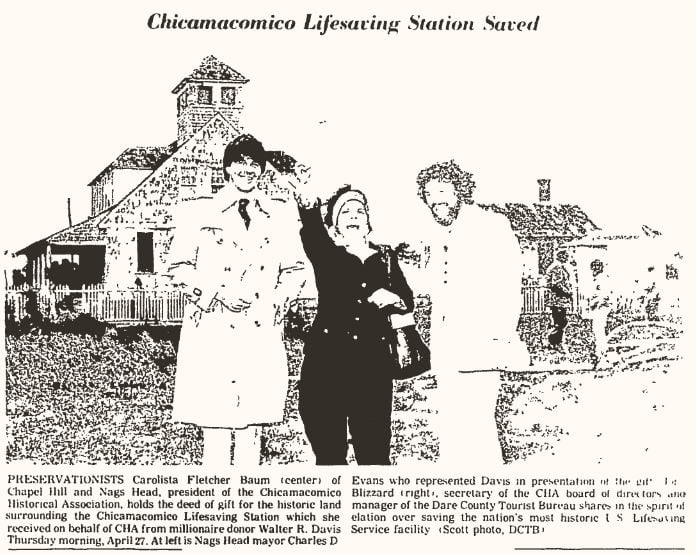 Hard-fought Battle of Rescuing on behalf of the Rescuers –
A century after being commissioned in December of 1874, the Chicamacomico Life-Saving Station was in rough shape and in need of a life-saving of its own. The facility had been abandoned by the U.S. Coast Guard in the mid-1950’s and, if left to the harsh coastal elements, it most certainly would have been lost. Fortunately, the iconic station was acquired by the newly formed Chicamacomico Historical Association, Inc. (CHA), which was chartered in 1974, and who raised funds to restore the structure however, this was only one piece of a larger vision to save all the buildings and the ten-acre site itself. In 1874, the property was granted to the Government to be used for the Life-Saving Service and when the facility was abandoned, the granted property reverted to the heirs of the grantors, which a century later consisted of approximately 150 individuals. The heirs eventually decided to have the property auctioned and it seemed that the full vision of the CHA would be realized, as they began raising a significant amount of funds for this purpose under the leadership of CHA President, Carolista Fletcher Baum, however the amount of funds were still limited.

When the bidding commenced, it was quickly realized that the fate of this historic property would be decided between the CHA and another bidder, Mr. E.S. Younce, a developer from Washington, N.C.. Younce topped the bidding, and the CHA found a way to raise even more funds to counter those of Younce. CHA President, Carolista Baum, was no stranger to this sort of fight, as she had recently stood toe-to-toe against developers and heavy equipment operators who had plans to turn Jockey’s Ridge into a development of vacation homes. In the end, Carolista Baum and her associates were able to save that big sand pile that is now the Jockey’s Ridge State Park.

Bidding on the Chicamacomico property went through three rounds and by this time was making newspapers across the state, where it was reported that the developer, E.S. Younce, was able to secure the property for $95,000 and it seemed as though the property and other historic buildings would fall victim to the bulldozer. Fortunately for the CHA, the news reports of the bidding war and the fate of the property were seen by Mr. Walter Royal Davis in Chapel Hill, North Carolina. Davis was originally from Elizabeth City and was a millionaire philanthropist, making his fortune in the oil business, and was influential in state politics. Davis was able to persuade Younce to sell him the Chicamacomico property and it is no doubt that Younce made a good return on his investment in the process. With ownership of the historic property, and on April 27, 1978, Mr. Davis deeded the land to the CHA, who were then free to turn their vision into the reality that is now the The Chicamacomico Life-Saving Station Historic Site & Museum to restore, preserve, protect, educate, and interpret the rich history of the valiant men of the U.S. Life-Saving Service.

Pictured are (left) Charles D. Evans, then the Mayor of Nags Head and who represented Mr. Davis by presenting the deed of the property to a triumphant Carolista Fletcher Baum (center), the President of the Chicamacomico Historic Association, and Mr. John Blizzard (right) the Secretary of the CHA Board of Directors and also Manager of the Dare County Tourist Bureau –
Published May 2, 1978 Coastland Times