The Beach Apparatus of the US Lifesaving Service and Early USCG

Home/History, News Release/The Beach Apparatus of the US Lifesaving Service and Early USCG
Previous Next

The Beach Apparatus of the US Lifesaving Service and Early USCG 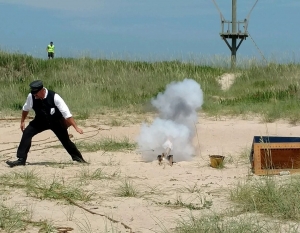 The Lyle Gun is fired during a Beach Apparatus Drill at Chicamacomico Lifesaving Station. See the shot line leading from the faking box at right to the shot, which is lost in the cloud of smoke. The range officer on the dunes assures a clear beach for the projectile to land. Each station had a Wreck Pole like the one in the background, this represented the mast of a ship during Beach Apparatus Drills.

The Beach Apparatus, also known as the Breeches Buoy or Beach Apparatus Drill, refers to a means of land-based rescue with origins dating back to the 18th century.

Perfected by the Station Keepers and crews of USLSS Stations in the late 18th century, it remained an integral part of their training and operations until the onset of helicopter rescue by the US Coast Guard in the 1950’s. Beach Apparatus is the equipment used in the operation. Breeches Buoy refers to the specific piece of equipment in which the person being rescued was transferred from ship to shore. Beach Apparatus Drill was the weekly practice of this means of rescue, performed every Thursday at 2pm at all USLSS, and later, USCG Stations. Until their mass-decommissioning in the mid-to-late 1950’s, more than 177,000 lives were saved using the Beach Apparatus and Surfboats of the USLSS and USCG. The Beach Apparatus was the preferred method of rescue employed by the crews, as it was much safer than launching surfboats into violent, storm-tossed seas. 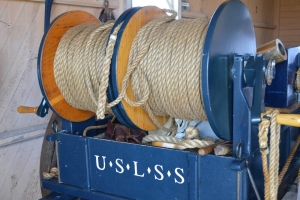 The Whip Reels mounted on the Beach Apparatus Cart at Chicamacomico. Each piece of equipment had a specific place on the cart and was loaded and unloaded by the Surfman responsible for its placement and use. It was imperative that the team perform flawlessly and that each man know the job of the man next to him, should one go down or be unavailable.

The Beach Apparatus consisted of a small, cannon-like gun, the Lyle Gun, which sent the initial line, the shot line, to the distressed ship. The shot line was the smallest diameter of the lines, ranging from ¼” to ½”. The shot line needed to be very long, due to being fired from the Lyle Gun, the impact of the wind while airborne, and ocean current when in the sea. The Keeper would determine which diameter to use based on a combination of distance to the ship, the wind and ocean current. 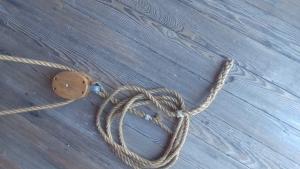 The photo above shows the Whip Block, the Tail of the Whip and Whip Line as each side makes its way back to its respective Reel. This block allowed two-way transport of lines, equipment and men to and from the ship. The Tail of the Whip, coiled at the right of the photo was attached to the mast of the ship. The Whip Reels were not used to reel the Whip Lines in and out during rescues, this was done by the Surfmen on shore “Shifting on the Whip”, or running with the whip line over his shoulder. The Whip Reels were solely for storage and transport of the line itself.

The goal was to have the shot line lay over the highest part of the ship where the distressed crew would generally seek refuge, and they could make the lifesaving lines fast to affect the rescue.The shot line was used to haul out the next piece of equipment, the whip line, to the wreck. It was imperative that the shot line could handle the strain of pulling the larger whip line out to the wreck without parting.

The whip line was one long line, ¾” diameter, divided evenly between two large reels on the Beach Apparatus Cart. The whip line ran through a pulley, the whip block, which had a piece of line, the same diameter as the whip, coming off the end of it. This piece of line, the tail of the whip, was attached to the shot line by the crew on shore after firing the Lyle Gun. The sailors on board the distressed ship would pull the shot line out to the ship with the whip attached to it. The sailors would then tie the tail of the whip to the mast of the ship, allowing two-way transport to and from the ship. 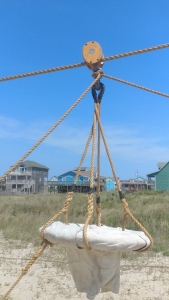 The Traveling block attached to the Hawser, the Breeches Buoy suspended from the Sister Hooks. The Whip Line made fast or “Snapped” around the Traveling Block. The Buoy Bridle extending from the bottom of the buoy is tied to the Whip inward of the Traveling Block and prevents the buoy from spinning wildly while being transported through the wind and waves.

It is important to note here that training among ship’s crews was necessary so that they understood what to do with the equipment being sent to them by the USLSS/ USCG crews on shore. This responsibility was that of the ship’s owners and captains. The rescue crews did send out a “Talley Board” on the shot line with directions in Spanish and French describing what to do with the lines coming to them. There are accounts of several unsuccessful rescue attempts where it was later determined that the crews on the ship did not know what to do with the equipment. There are also stories of rescuers putting their own lives at risk and swimming out to wrecks to assist untrained or injured sailors in setting up the equipment. 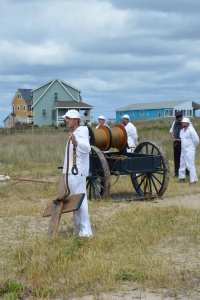 Surfman #5 shows and explains the Sand Anchor to spectators at a Chicamacomico Beach Apparatus Drill.

The next piece of equipment necessary for the rescue was the hawser. The hawser is the lifeline of the drill. The hawser was transported out to the ship by attaching it to the whip line after the tail of the whip was made fast to the ship. The Surfmen would then shift on the opposite side of the whip from the hawser, pulling the hawser out to the ship, where it would be made fast to the mast above the whip block. The hawser is the largest diameter line and carries the traveling block. The traveling block has a sister hook attached, which is opened to allow attachment of the breeches buoy. The breeches buoy is essentially a life ring with a pair of shorts sewn into it for the shipwreck victim to sit in while being pulled to shore. The traveling block is made fast to the Whip lines, which, with the whip block tied to the mast of the ship, allows the breeches buoy to be pulled out to the ship, a sailor to get in and be brought ashore by the surfmen then pulling on the opposite end of the whip. The hawser is put under tension in two ways; by the fall, a 4:1 ratio block-and-tackle device, and by standing the crotch pole.

The Beach Apparatus rescue lines were anchored into the beach by means of a simple piece of equipment called the sand anchor. The sand anchor was 2 pieces of 2” X 10” plank, each about 4 feet long, with a large eye bolt through the center of both bolting them together for flat storage. They were pivoted open on the eyebolt, and buried about 30 inches into the sand of the beach, then completely covered with a line, the Sand Anchor Pennant protruding out of the sand. The inner block of the fall was then attached to the Sand Anchor Pennant.

After all of these things are in place, the Hawser is under great tension and is elevated to keep the breeches buoy up, out of the surf. The breeches buoy is hanging from the hawser and is attached to the Whip at the sister hooks and buoy Bridle, the Apparatus is used by simply pulling one side of the Whip to get the buoy out to the wreck, then shifting on the other side of the Whip to transport the buoy back to the shore. This was done as many times as necessary until all persons were safely ashore. 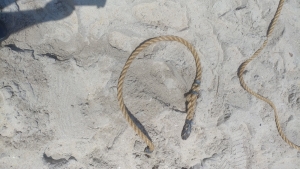 The Sand Anchor Pennant after the anchor has been buried. It is impressive how much tension this device can hold into the soft sands of the beach.

The crew mans the fall, attached to the Hawser, shown herein a special day of training with USCG at Chicamacomico Lifesaving Station. 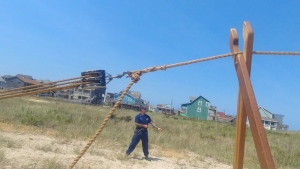 The Prussick is a loop of line, at 5 feet long, which is wrapped in upon itself, around the Hawser, which the hook on the outer block of the fall snaps into. This photo was taken on a day when The Surfmen of Chicamacomico had the pleasure of training with a USCG Chief’s group. 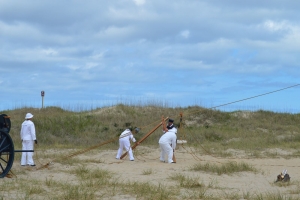 The Crotch Pole before fully standing, note how the Breeches Buoy is hanging almost onto the ground. The outer block of the Fall attached to the Hawser over the Surfman’s right shoulder and the inner block to the Sand Anchor pennant beside the surfman’s right foot. 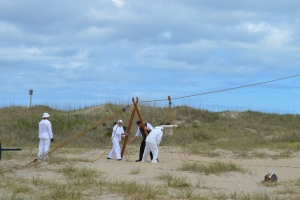 The Hawser after the Crotch Pole is placed. Note the elevation of the Breeches Buoy as well as the change in the angle of the Hawser Line. The block, just behind the head of the Crotch pole is where the Hawser attaches to the Fall with the Prussick, or Cat’s Paw.

A Surfman at Chicamacomico “Shifts on the Whip” during a Beach Apparatus Drill, bringing ashore the child “shipwreck victim”.
The Drill is done at Chicamacomico every Thursday at 2pm Memorial day through Labor day.
Courtesy of The Coastland Times.

Click here for a brief video of the Beach Apparatus Drill

The Beach Apparatus Drill is performed between Memorial Day and Labor Day – every Thursday at 2pm. 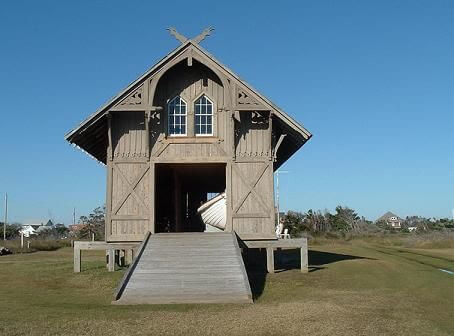