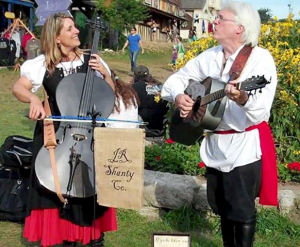 JR Shanty Co. is an instrumental and vocal folk duo which performs traditional sea shanties and songs of the sea. A dynamic husband and wife team, Richard Workman plays guitar and vocals and Julianne Laird plays cello and vocals. Their performances include original, traditional, and often humorous songs accompanied by cello and guitar or sung a capella.

Originally from western Pennsylvania, Julianne is a string music teacher in the Indiana (PA) Area School District. Richard is retired after teaching vocal music in the Laurel Highlands School District for 37 years. Both Julianne and Richard have earned Master’s Degrees in Music.

The Chicamacomico Historical Association is a private, 501(c)(3) non-profit organization whose purpose is to restore, preserve and interpret the buildings and history of Chicamacomico Life- Saving Station, as well as the U.S. Life-Saving Service and its successor, the U.S. Coast Guard on the Outer Banks.