“I hereby declare that the Keel of Midgett (WMSL 757) has been Truly and Fairly Laid,” Jazania O’Neal of Rodanthe announced at Ingalls Shipbuilding in Pascagoula, MS. The Authentication of the Keel ceremony for the United States Coast Guard National Security Cutter Midgett (WMSL 757) was held on Friday, January 27. Eleven descendants of its Namesake, John Allen Midgett, Jr (b Aug 25, 1876 – d Feb 9, 1938) , Chief Warrant Officer and Keeper of Chicamacomico Coast Guard Station No 179, were hosted at the ceremony. Also among those in attendance were Pascagoula’s Mayor, shipbuilders who were on their break, and officials with the USCG and Huntington Ingalls Industries. 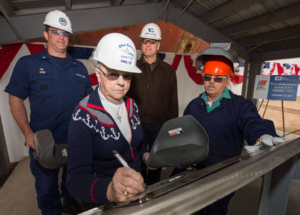 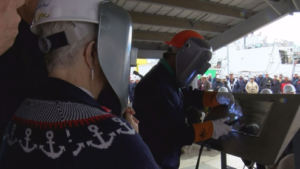 “The keel is the foundation of the ship, much like life-saving is the foundation of the Coast Guard,” was explained by the director of USCG’s Project Office Gulf Coast at a previous laying of the keel in the NSC Legend-Class Series. The ships in this series are named after those who defined the legacy of the Coast Guard’s service. It is at this stage of the ship’s construction when the two main blocks are brought together, uniting the centerline from bow to stern.

Two stainless steel plaques with Ms. O’Neal’s initials welded into them were made onsite at Ingalls serving to authenticate the keel. One will be placed on the ship; the other was presented to her at Friday’s celebration. “The National Security Cutter Program is vital to our Coast Guard, our country and to Ingalls Shipbuilding,” said Ingalls Shipbuilding President Brian Cuccias. “Today, we lay the foundation upon which this great ship will be built. The Midgett, like her sister ships, is being built to the highest quality standards with outstanding cost and schedule performance, and the NSC team is energized to make this one the best yet.” 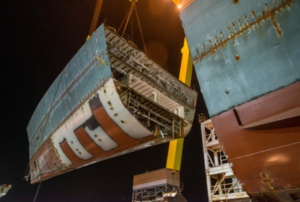 On August 16, 1918, Capt Midgett lead his crew of six on-duty that day, through the ferocious surf to approach an inferno on the ocean. The British Oil Tanker, Mirlo, was en route from New Orleans to Norfolk. At 4:30 PM it was torpedoed by a German U-Boat seven miles off the Rodanthe Coast. The explosion was spotted from the watchtower of Chicamacomico Station. Swift action was taken by Capt Midgett. The surfboat and Chicamacomico crew had “cleared the beach” by 5 PM. Forty-two men were rescued and brought to Chicamacomico Station to be given medical aid, clothed, fed, and given a place to rest for the night. Capt Midgett ends his own report as he signed off at 11:59 PM, “…myself and crew very tired….”

Midgett is the eighth NSC to be built in The Legend-Class Series. Funding has recently been secured for a ninth. They are the flagships of the USCG’s fleet. Originally at an average cost of $684 million; they will replace the Hamilton Class Cutters, which were 378 feet and of high technological capability when introduced in the 1960’s. At 418 feet with a 54-foot beam and displacing 4,500 tons with a full load, the new NSCs have a top speed of 28 knots, a range of 12,000 miles, an endurance of 60 days and a crew of 110 with berthing for 148. NSCs conduct numerous deployments around the globe. Literally acting as a Coast Guard sector command afloat, NSCs have a large flight deck capable of conducting flight operations for both manned and unmanned rotary aircraft. These new cutters meet the high demand for maritime homeland security, law enforcement, marine safety, environmental protection and national defense missions.

Ingalls Shipbuilding, a Division of Huntington Ingalls Industries, is the largest shipyard in the world. Brian Cuccias informed reporters after the ceremony, “Our shipbuilders get really good at bringing costs down. The NSC Nine that we just negotiated- it actually was less a price than the NSC we had three and half years ago with NSC Six, so that’s real learning and its real payback to our shipbuilders and our taxpayers.” Six ships have already been delivered to the Coast Guard and the seventh, named in honor of Sumner Kimball, who organized and directed the US Life Saving Service, will be Christened this March,
Ms O’Neal was named  USC Midgett Sponsor early in 2016. She is the daughter of Capt Midgett’s eldest child, Nora Midgett Herbert. Nora, along with her two brothers and sister would have viewed the heroic rescue from the beach a day after her 19th birthday. Jazania Payne Midgett, Capt Midgett’s wife for whom Ms. O’Neal is named, assisted Enlisted Cook, John Herbert, who would become her son-in-law, in preparing enough beef hash and biscuits to feed a hundred men.

In her remarks at Friday’s ceremony, she was deliberate to note, “John Allen Midgett, Jr lead the way he had been lead. His Father was a well-known seaman and was also a Lifesaving Station Keeper when John Allen, Jr entered The Service. A different Mighty Midgett was Keeper at Chicamacomico Lifesaving Station before John Allen, Jr; and, yet another Mighty Midgett followed him as Keeper at Chicamacomico Coast Guard Station. That Station was decommissioned in 1954, and proudly now stands as a Historic Site and Museum. Fitting for the event today, all these Rescuers sailed many vessels, being born and raised on Hatteras Island; and had a great respect for those navigating open waters.” She went on to say for her Grandfather to be memorialized as Namesake in the company of those previously recognized “surpasses validation of our heritage”. Many more descendants, extended members of The Midgett family, as well as members of Chicamacomico Historical Association anxiously anticipate the Midgett’s Christening tentatively scheduled for December 2017. It is also to be held in Pascagoula. Its homeport has not yet been determined.

This is the second USCG Cutter Midgett. Nicknamed The Mighty Midgett, Midgett (WHEC 726) was commissioned March 17, 1972 in San Francisco. It has had a great reputation fulfilling its multi-purpose function. Its home ports have been Almetta, CA and Seattle, WA. Former Commander of the ship, Capt Laura Dickey of Wilmington, NC, made a memorable visit to Chicamacomico Historic Site in Aug 2014, where several of John Allen, Jr’s descendants had the chance to meet with her to exchange questions. In attendance for the Keel Laying of Midgett (WHEC 726) at Avondale Shipyard (since acquired by Huntington Ingalls Industries) in New Orleans, LA on April 5, 1971, were John Allen, Jr’s sons- Capt Ellery C Midgett, USN Ret and wife Lorraine; Herbert Midgett, Sr and wife Dorcas; his daughter- Bethany Midgett Gray and husband Julian; Grandchildren- Sgt Mgr Wiley M Gray, Sp Forces; Allen Gray and wife Frances; and Great Grandchild- Gail Gray. After its Christening (September 1971), Midgett (WHEC 726) was exhibited in Morehead City, NC in observance of Midgett Day on July 2, 1972. The date was made official by The North Carolina Navy League Council, the state of North Carolina, and the US Coast Guard to honor John Allen Midgett, Jr. On that date, individuals with the last name Midgett serving in the USCG filled the 378-foot ship’s deck for a photograph. The tradition continues with such fine examples as Chief Warrant Officer Ryan Gentry of Rodanthe, whose mother’s maiden name is Midgett; and Boatswain Mate 2rd Class Tonya Midgett of Salvo. Officer Gentry is Marine Safety Specialist over inspections for all ferries and large passenger vessels from the Virginia line extending to Hatteras. BW 2 Midgett is currently stationed at Hatteras Inlet. Both have enjoyed being close to home at this point in their careers.

In 1920, following The Mirlo Rescue, Capt Midgett received a Silver Cup from the British Board of Trade. He and the Surfmen- Zion S Midgett, Leroy S Midgett, Arthur V Midgett, Clarence E Midgett, and Prochorous Lee O’Neal were awarded the King George Medal for Bravery, and the US Gold Lifesaving Medal of Honor. Eventually, all received the highest award the US Government would issue- the Grand Cross of the American Cross of Honor.  Chicamacomico Historical Association is making preparations to commemorate 100 Years since The Mirlo Rescue in August 2018. Official representation from Great Britain is expected. According to CHA Board Members, it is also hoped that descendants from The Mirlo Crew may be present. In 1970, a Mirlo Survivor struck up a letter-writing dialogue between himself and Capt Midgett’s daughter, Bethany Gray. In his initial letter simply addressed The Midgetts, Coast Guard Station No 179, Rodanthe, NC, USA, he writes, “An oil tanker by the name of Mirlo was torpedoed… off Rodanthe…and the crew was saved by the Midgetts.”  Of particular note is that he informed Mrs. Gray that he had named his infant daughter, Mirlo, upon returning home to England shortly after the rescue as a distressed British Seaman.